In our Press Kit we are offering 3 different lengths of bios for WEB of ONE, three different resolution size images.

Music is a revolutionary, evolutionary force.
Eostar and the Web of One was born around the ceremonial fire. It was the start of a magical journey as Eostar Kamala met Mathias Pailas in song with an instantaneous and even mystic musical chemistry.

They are the core of EOSTAR and the WEB of ONE, a quintet from the San Francisco bay area.
On their new album Illuminate, Eostar and Mathias draw on a range of spiritual and musical traditions on songs at once expansive and intimate. Weaving together musical instruments from around the world cradled in an overtly western psychedelic rock foundation, Illuminate draws the listener into a deep sonic experience with a richness that continues to reveal itself through many listens. “ We are genre benders, so by joining forces musically we created something unique yet totally accessible “ Eostar says. “ Its a fusion of our collective musical pasts.”

In Eostar’s case, that would be a singer/songwriter immersed in sacred and devotional music, stemming from her interest in yoga, Shamanic healing and plant medicines.
In Mathias’s case, that would be a virtuoso improvisational guitarist steeped in a deep study of lead guitar ranging from psychedelic rock to blues, folk, funk and even bluegrass; from Jerry Garcia to Doc Watson, BB King to Django Reinhart.

Together they have become something more, something greater than their own parts:
“ We are connected and driven by the evolutionary impulse of the universe, the Global consciousness shift, which points toward our Oneness as inhabitants of the same planet.”Eostar says, “ We can’t alone “ save the world” but through music we can express the timeless consciousness of peace, love and unity that still emanates from the 60s and is growing and evolving in these present times.”
“We are pilgrims of the global consciousness shift,” Eostar says. “Using music as medicine, each of our concerts is a ceremony where we invoke the power of peace and love through sound and dance.”

Another historic meeting happened once-again at around 5      am in the morning at the mystical twilight hour, when the duo played a rocking set at Burningman in 2011: Nigel Wolovick, a highly-talented multi- instrumentalist and sound engineer was listening to their music with amazement as the morning sun hit the horizon and the frozen fingers started to play with more vigor on the guitar-fretboards. From here on Nigel became a core member of the band, mainly on keyboards but occasionally on flute as well.
Together with a changing cast of bass players and drumkit players, they have toured up and down the West Coast as well as several tours to Europe, Central and South America, spreading their music broadcasting a higher consciousness. These travels and concerts yielded a live album West Coast Alive! in 2013.

Eostar wrote songs for Illuminate based on a diverse array of inspirations: the 13th century poet Rumi on “Spirit in the End,” a Buddhist mantra on the lilting “Let Go,” a Native American legend on “White Buffalo Woman,” and the words of a yoga master on “Namaste”, a South-Amarican shamanic tradition on “Bitter Medicine”, just to mention a few. Her vivid lyrics and striking voice are surrounded by airy, spacious arrangements of woodwinds, string instruments, percussion and Mathias’ guitar playing, which adds color and texture to compliment what he calls Eostar’s “melody rich” writing style.

When producing the album Mathias states, “I tried to tap into that transcendent present moment connection between nothingness and something,” he says “ That was the journey for me, dropping deep into that mystical place of silence and emptiness and bringing forth the sonic tapestry from these almost altered states of consciousness.”

The journey that began for Eostar and Mathias around the sacred fire is a continuation of the life quests they had begun separately. Born in Communist Hungary, Eostar realized early on that she was unwilling to submit to the arbitrary authority of a regime that sought to curtail free will. “I just learned to not listen to the ruling conventionally accepted dogma, and keep my eyes open for what is true for me, outside of socially accepted thinking patterns and philosophical ideas .” she says. She moved to the United States as a young woman, settling on the West Coast where she became a yoga teacher, was initiated into the Essene Path of Mystical Communion and pursued life as a visual artist, sound-healer, poet and musician, fronting the devotional new- age folk band Fearless Love in Eugene, Oregon.

Mathias has deep roots of his own in the counterculture, and he credits his spiritual awakening to immersion into the human potential movement and Eastern philosophy, 15 years of Kriya Yoga, as well as psychedelics and the Grateful Dead. He and his twin brother spent more than 20 years fronting the nationally infamous underground jamband Double Dose, playing to tens of thousands of people in the massive Grateful Dead subculture, becoming a fixture at Rainbow gatherings and other festivals, and sharing stages with musicians including Blues Traveler, Widespread Panic, Warren Zevon, Dave Mason, Merle Saunders, Hot Tuna and many others.

“We both arrived at a spiritual awakening through different means, but we have come to the same place of realization that we are here to love, learn, grow and be part of an evolved conscious culture and a revolutionary force that is headed toward the liberation of one’s own self,” Mathias says.

Music is the way they express that realization, and while consciousness and devotion are overarching themes in the songs of EOSTAR and the WEB of ONE, they’re not prerequisites to listen. “We want to reach people who are into exquisite, high quality music,” says Mathias. “It isn’t about glamor, we’re not doing it to pursue fame, music is our spiritual practice we offer to the world. We’re doing it because we believe that creating positive, uplifting music with an overarching message of peace and love, has the power to shift consciousness. This is really important at this time in human history.”

To listen and watch live performances of WEB of ONE music and find out about upcoming shows please visit www.WEBofONE.net

Eostar and Mathias’s San Francisco based ” WEB of ONE ” is a 5 piece original, psychedelic, mystical , jazz-rock jamband. WEB of ONE’s ecstatic, guaranteed-to-make-you-dance band infuses Eostar’s  overtly conscious, devotional lyrics and hypnotic melodies with Mathias’s transcendental improvisational lead guitar work. The adept group of musicians – now including Nigel Wolovick on keys, Jack Springett on drums and Jeff Mogalian on bass – masterfully traverse through many moods and textures designed to take you on a magical journey of an awakened consciousness. Eostar’s didgeridoo playing adds to the ecstatic and trance nature of the instrumental jams. Founders, Mathias and Eostar come from different musical backgrounds: Mathias Pailas, from the counter-cultural band DOUBLE DOSE, has toured the country many times playing multiple festivals and released 3 CDs. Eostar Kamala, devotional singer / songwriter has been active in the Northwest and California for many years as a devotional musician.

WEB of ONE has been touring extensively through Oregon, California and Mexico the last two years and has performed with great success at festivals such as Synthesis2012 in Mexico, Pranafest, Peace Village, New Earth Festival, Peace Village Festival, Mystic Garden Gathering and the Oregon Country Fair.

WEB of ONE’s album “WEST COAST ALIVE!” in 2013 has been well received among lovers of devotional dance music as well as jamband music. On their new album “Illuminate”, Eostar and Mathias draw on a range of spiritual and musical traditions on songs at once expansive and intimate. Weaving together musical instruments from around the world cradled in an overtly western psychedelic rock foundation, “Illuminate” draws the listener into a deep sonic experience with a richness that continues to reveal itself through many listens.

3 different size images of WEB of ONE: 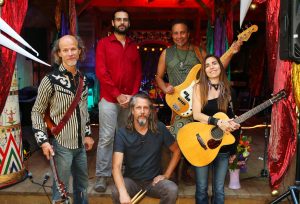 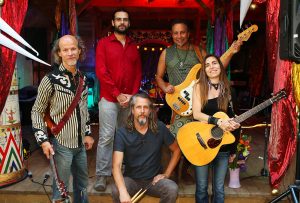